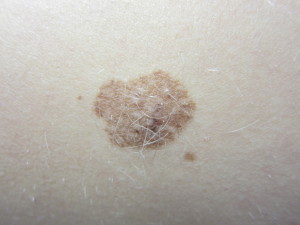 A congenital nevus, “mole”, “birthmark”, is a nest of pigmented cells called melanocytes located underneath the skin causing a discoloration.  A congenital nevus is present at birth and carries a higher rate of possible conversion to the cancer melanoma.

Treatment involves either consistent monitoring at least on a yearly basis with your dermatologist or a complete surgical excision by your surgeon.  Most can be removed surgically leaving a thin linear scar.  In some instances, if very large, excision may require tissue expanders (balloons) placed to stretch the normal skin to reconstruct the area after the excision, or even several excisions (serial excisions) to remove the nevus in its entirety.